His interests are myriad. He’s fascinated by science generally, physics and electricity more specifically. He loves space, and for years he has talked about becoming a space asteroid miner when he grows up. At least, when he isn’t imagining starting a business manufacturing and selling Iron Man inspired armored suits to the general public for self defense. Indeed, commerce and economics have their own appeal to him, as does almost anything involving money, and he frequently has new ideas about the many things he might want to do with his life.

In the meantime he loves playing games. Board games, imaginative games, video games, word games and physical games. He never really tires of any of them, no matter how challenging and difficult they might be, and gladly perseveres to improve his skills and abilities. In that vein he’s recently become a fan of MasterChef Junior and wants to start staging our own household cooking competitions on a monthly basis.

Insects are one of his most abiding passions. He’s fascinated by bugs of all sorts, and never misses out on opportunity to examine one, alive or dead, and has no fear of holding or catching them. Some of his most prized possessions are his copies of Ultimate Bugopedia and Beetle Boy, and he’s desperately saving up his money for an ant farm and an insect collection kit to take his Entomology studies to the next level. Earlier today he told me that the best thing about last week was all the insects that he encountered. Lately he’s been capturing grasshoppers and caterpillars, and recently spent a long time examining and playing with a large Mantis.

Machines and contraptions are another realm of passion where nothing escapes his interest. He builds them out of LEGOs or cardboard, or whatever material he has on hand. He observes any mechanical objects he encounters closely and is constantly drawing conclusions, forming hypotheses and asking questions about huow exactly they work. His first favorite TV show was Mighty Machines and he still loves it, though these days he’s more likely to watch much more elaborate documentaries about space probes or the Titanic.

Speaking of the Titanic, he loves history with a passion, and the Titanic is just one historical topic that he never tires of. Especially military history, and he frequently asks me to tell him stories about wars and battles of the past, but anything involving the past holds a unique interest for him. A few days ago he was lounging about thinking, until eventually he said, “Daddy, it’s all just so amazing! So amazing how things in our country have changed so much since we fought against England!” Naturally this led to a long conversation about American history and the many things that happened to build our nation, both good and evil. Not only does he love topics like history, but he enjoys deep conversations about them and he constantly wants to know more.

Music is also great fun for him. He loves to listen to a wide variety of tunes, from classical music to a variety of contemporary styles. Some time back he bought himself an electric guitar, and although he hasn’t had any lessons he enjoys bringing it out, hooking it up to an amp, and experimenting. The sound alone is enough to capture his imagination.

I could go on for pages like this, talking about the many things that he loves and that show some of who he is as a person, but that would get tedious. As it is, what I’ve written here barelt scratches the surface of his interests and knowledge. He’s a smart, awkward, social, quiet, silly boy full of untold potential and a near limitless array of topics that intrigue him. There’s no way to know which of those will lead him to a bigger path in life as he grows and makes his way out into the world, but it’s my job to let him follow whichever ones he chooses.

And he is following those paths, learning and exploring constantly. He writes code and programs robots, plays video games and chess, watches documentaries and cooking shows, builds and experiments every day. He cooks and volunteers to help make dinner simply so that he can understand food and how to make it. When, while discussing bread and his little sister’s health difficulties he asked me what gluten is, he wanted a detailed scientific answer so that he can genuinely understand it. And he thanked me when I provided it and didn’t talk down to him. His life is full of exploration, even if sometimes they’re merely inside his head when he’s sitting still and imagining a new creation or pondering a new idea.

All this is to say that he’s a perfectly typical Unschooled boy. He has a huge array of passions and interests like many children, but rather than risking having those passions ignored and stunted by traditional schooling, he has the freedom as an Unschooler to spend his entire days pursuing them in whatever fashion he desires. The last thing I ever want to do is to sidetrack this marvelous pursuit of knowledge and understanding. I have no desire to school by forcing him to spend his time on studying topics and skills that hold no particular meaning or fascination for him. It’s my job as his father to support and encourage him as he lives his life and follows the path that his own dreams build for him, and that’s why we Unschool.

Speaking of which, there is one other thing that he’s very interested in, one that is quite important at the moment. He loves Hiking and backpacking. As I mentioned earlier in the year when I wrote about our hike up Emmaline Lake Trail, he’s become passionately interested in backpacking, to the point that he desperately wants to hike the entire Colorado Trail with me next summer. While there are always things that can go wrong in such an adventure, and there’s no guarantee of success, we’re training and exercising together with the goal of tackling the 486 mile trail from Denver to Durango next summer, just after he turns 10. He’s even been studying first aid on his own to make sure we’re prepared for emergencies. It should be a marvelous adventure for us both, and more importantly he’ll learn and grow enormously on the trail. Precisely because it’s something that he wants to do. 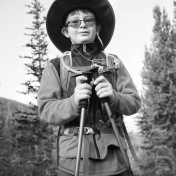 All geared up and ready to go on a hike. 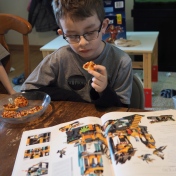 Pizza and a LEGO book. What could be better? 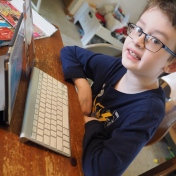 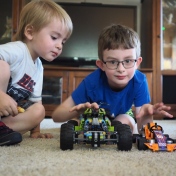 He’s about to race these two vehicles to find out which can better handle the carpet.

This site uses Akismet to reduce spam. Learn how your comment data is processed.

A full-time Dad, I spend my days Unschooling my six awesome children. I write about Unschooling, books, photography, and whatever else I feel like on my blog, The Dad Hatter.