It’s a cold morning, though the snow has mostly melted. The lack of snow means there’s not a lot of interest around the house in playing outside, so it’s an inside kind of day.

Which also makes it a day full of spontaneous learning.

Ensconced in the family reading chair on the other side of the room, N is immersed in his favorite non-fiction book, the Ultimate Bugopedia. Today he started in the Coleoptera section and has moved on from there, occasionally dashing across the room to share interesting facts with me as he discovers them. Just moments ago he asked for a ruler to measure the size of particularly large beetle.

A is also in the living room with an iPad, initially working with some reading apps to improve his skills, and now watching videos about American history and politics. This is a somewhat new interest for him, but he’s thoroughly absorbed in the topic this morning. From time to time asks me questions about what he’s watching and checks to make sure the next video is appropriate.

In the living room H has set up the laptop and spent about an hour studying French via Duolingo. After doing that for a while she exchanged a few e-mails with her cousin and best friend before diving into some Bitsbox coding projects. She’s the most likely of our children to spend time programming, and thrives when she in the midst of solving a problem and tweaking her program until it does precisely what she wants.

The littler kids are also involved in a variety of pursuits. G designed and built a very cool police helicopter out of LEGO bricks, before moving on to build a massive super villain. M has been building towers on top of DUPLO vehicles, while little T has been snacking all morning, walking around with a bowl of cereal and observing her older siblings in their pursuits.

This is an ordinary, everyday snapshot of Unschooling. None of the kids are following curriculum or following any course of study that was assigned to them. They’re each doing the things they want to do, without interference from me. I’m simply here to facilitate and help and empower. To help them find answers to their questions and to give them the tools they need to learn about their passions.

I don’t know what the rest of the day will hold. I’ll probably read to the bigger kids for a while – we’re currently in the middle of Harry Potter and the Deathly Hallows and they’re loving it – and N is planning on teaching G a little bit more about chess. There will be LEGO and K’NEX building, likely some coloring and sculpting with Play-Doh. Perhaps some video games will be played – most likely Minecraft.

Or maybe none of these things. One of the most wonderful aspects of Unschooling is the sheer unpredictability of it. While we have routines of various sorts and it’s sometimes easy to predict how the kids might spend their time, sometimes they head off in entirely unexpected tangents. And it doesn’t really matter how predictable or unexpected their paths on a given day happen to be, because either way they’re going to be learning. 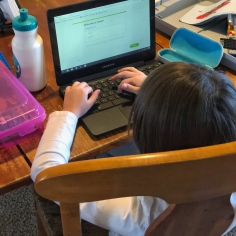 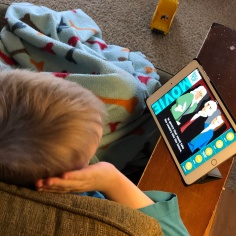 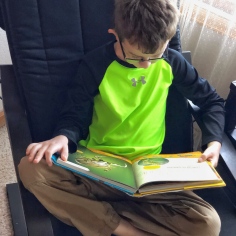 3 thoughts on “Snapshot of an Unschool Morning”

This site uses Akismet to reduce spam. Learn how your comment data is processed.

A full-time Dad, I spend my days Unschooling my six awesome children. I write about Unschooling, books, photography, and whatever else I feel like on my blog, The Dad Hatter.

The air is still really hazy. But it was kinda fun watching an orange sun rise during my morning run.
Today we're having a blast at the #childrensmuseumdenver exploring the #adventureforestdenver exhibit. We haven't been here in a long time and the kids are loving it. #dadlife #unschooling #unschoolinglife
Band rehearsals start in a few weeks, so it's time to get back to work! #clarinet #clarinetist #yamahaclarinet
Our sloth fanatic loves the new exhibit and is having a fantastic day observing his favorite animal at #denverzoo
Morning walk. #longmont #morning #dadlife
It's time for a family #boardgame day! Trying out Storm Vault for the first time and the kids are very excited. #unschooling #unschoolinglife #dadlife #boardgames
This is her idea of a great way to spend a snowy morning. A freshly brewed butterscotch steamer and an awesome book about Geology! #unschooling #unschoolinglife #unschoolers #dadlife #homeschool
Follow The Dad Hatter on WordPress.com
Loading Comments...
%d bloggers like this: